Luxury cruises offer the unique opportunity to visit several destinations, some of them huge distances, in a relatively short time, without having to commute from airplane to airplane or hotel room to hotel room. Unfortunately, luxury cruises have a bad reputation among individual travelers: overpriced, overcrowded and outdated. With these 5 examples of wonderful adventure cruises, I would like to show you that a trip by ship can also look completely different and make the adventurer's heart beat faster.

1) The flow of rivers: Amazon, Peru 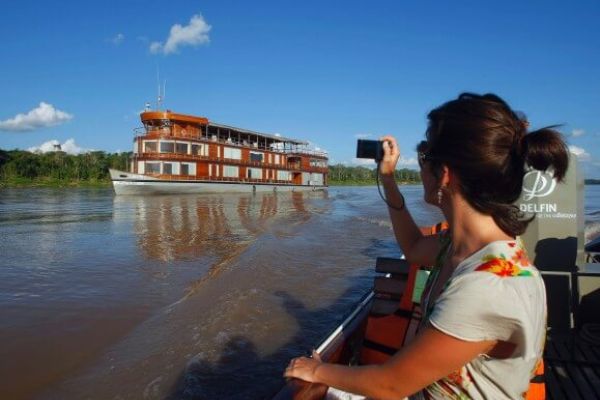 Luxury cruises: The Amazon is one of the longest rivers in the world, as its main arm measures almost 6,500km! No wonder cruises on this river are pure joy - whether in Brazil, Peru or Ecuador. The waterways through the rainforest can be explored ideally by boat and from the panorama deck you can watch the colorful fauna in peace.

Just recently I was on the road with the Delfin II in Peru and couldn't stop being amazed. My highlight was definitely the pink dolphins and swimming in the Amazon. There are only 10 suites on the ship, so you are really among yourself and far removed from the image of the floating hotel complex! The sister ship Delfin I is even smaller. Excursions into the rainforest are offered daily - the perfect mix of luxury, nature and adventure!

2) Sailing in the Arctic: Svalbard, Norway 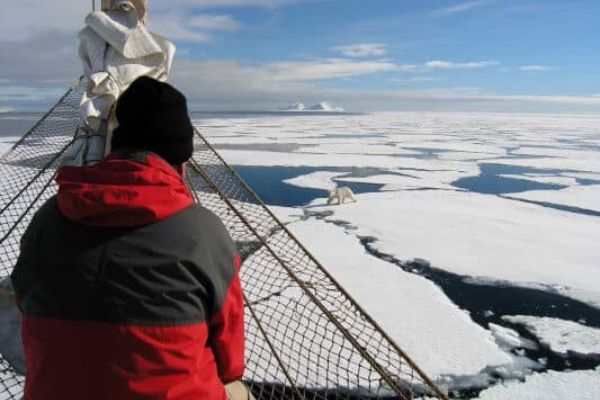 Luxury cruises: I normally associate sailing trips with the crystal blue waters of the Caribbean or the rocky islands and bays in the Mediterranean, but the Arctic - that's pure adventure! For example, the S / V Noorderlicht takes you from the Norwegian Lofoten to Spitsbergen, and if the ice allows it even around the Arctic archipelago. Polar bear sightings in the untouched nature are of course included.

The ship, as is usually the case on Arctic cruises, only holds about 20 passengers and due to the rough conditions, help on board is definitely expected. The excursions in the dinghies sound particularly tempting, with which one can gain insight into otherwise inaccessible areas. 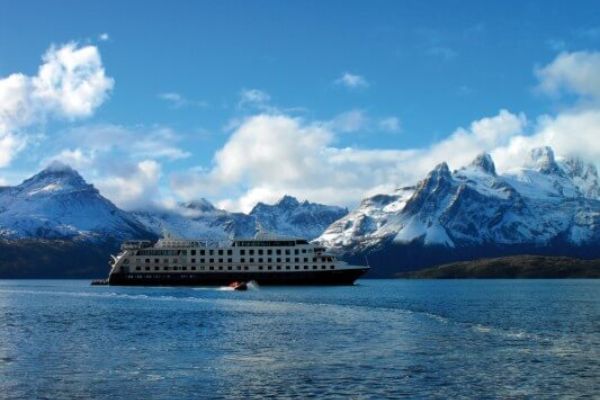 Luxury cruises: Patagonia has to be experienced - by car, on foot and of course on the ship! Large areas of the region are not accessible by roads, especially the furthest south of Chile, which is furrowed by fjords and islands. This unspoilt nature makes the Patagonia cruises with the MS Stella Australis so special. The ship leaves Ushuaia in Argentina and reaches Punta Arenas in Chile 4 days later. However, since there are other destinations on the way back, the 8-day round trip is always worthwhile.

My favorite experience on this route is the circumnavigation of Cape Horn, the legendary “end of the world”. However, this is only possible with the right weather conditions - keep your fingers crossed! The impressive glaciers of the mountains, the sparkling blue fjords and the huge penguin colonies of the rest of the route make this one of my favorite cruises.

4) The River of the Golden Pagodas: Irrawaddy, Myanmar 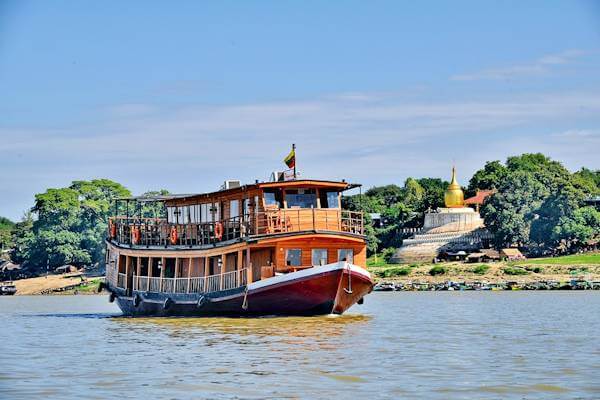 Luxury cruises: Myanmar, or Burma, is a relatively blank slate from a tourist point of view, as until a few years ago visitors were only given a one-week visa. There is so much to see here. I find the river cruise on the Irrawaddy River, which is navigable for around 1,500 km, particularly fascinating. The most beautiful section is probably between Mandalay and Bagan, the country's old royal city. Here is the religious center of the mostly Buddhist population, who express their faith through numerous magnificent monasteries and pagodas.

Large passenger steamers don't even get a license here, so the river cruise is guaranteed to be enjoyed on a small scale. Due to the country's long seclusion, this journey is also a journey into the past - to magnificent colonial buildings, traditionally dressed people and historical monasteries.

5) To the enchanted islands: Galapagos, Ecuador 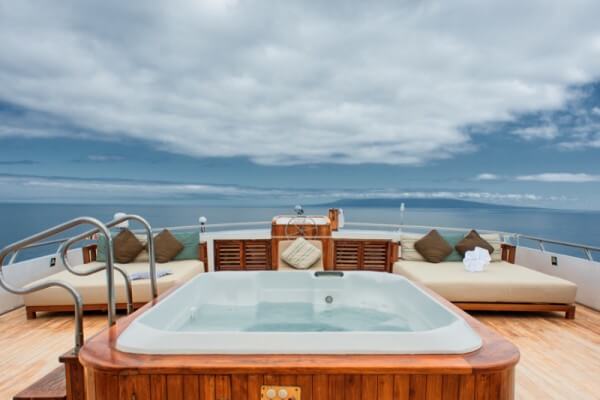 Luxury cruises: For me, the Galapagos Islands mean above all unusual landscapes and extraordinary wildlife. To experience the diversity of the over 100 islands - only 5 are inhabited - island hopping on the cruise ship is ideal. I can especially recommend the two-week expedition with the M / V Grand Odyssey. This luxury yacht can only accommodate 16 passengers, so no one stands in the way of exploring lonely islands and paradisiacal bays.

A special experience is a visit to the island of Black Turtle Cove. In the bays, framed by mangrove forests, there are sharks and rays that can be observed from a safe distance from a kayak or dinghy. Whether hiking in the lava fields, relaxing on the white sandy beach or close encounters with blue-footed birds and giant turtles - the activities of the numerous shore excursions make this cruise the ideal all-round experience on the Galapagos Islands. 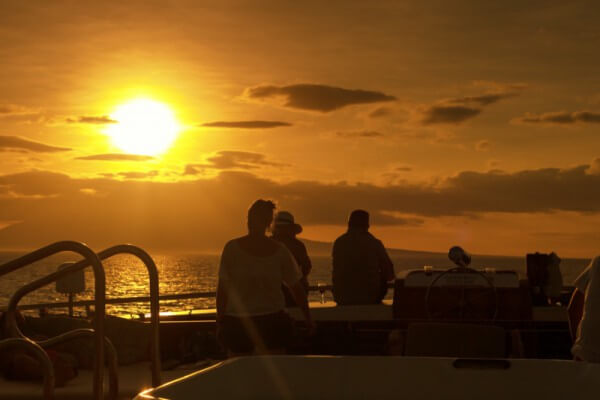 Should I have awakened your wanderlust for expeditions on board an adventure ship, stop by here and choose your favorite route right away!

The essence of the trip: Morocco travel tips - I want to develop my creativity.

Stargazing - a MUST when visiting the Atacama Desert

Stargazing is a must when visiting San Pedro de Atacama. A new and improved observatory in the old parish of Tulor, far from any light pollution, gives you a vision like never before.

Chile has to be experienced - the variety of experiences in the most diverse landscapes that the long, thin country has to offer is simply unimaginable. Read the travel tips from our managing director Dr. Julia Malchow.

A very special experience to explore a country by tent is offered by Bhutan, because it has only been accessible to tourists for a few years. Dr. Julia Malchow writes in her blog about her varied journey and how she did not have to do without luxury.

A journey from the highlands of Costa Rica to its breathtaking coast: interaction with the indigenous and very withdrawn Cabecar Indians, extreme white water rafting and the Osa peninsula on foot and by kayak: an expedition for all the senses.

Africa as a travel destination with children sounds like an absolute no-go for many. I've been asked many times how I dare to do this with my own sons - by friends, family and acquaintances, but also by readers, customers and clients. The solution is very simple: preparation and planning. 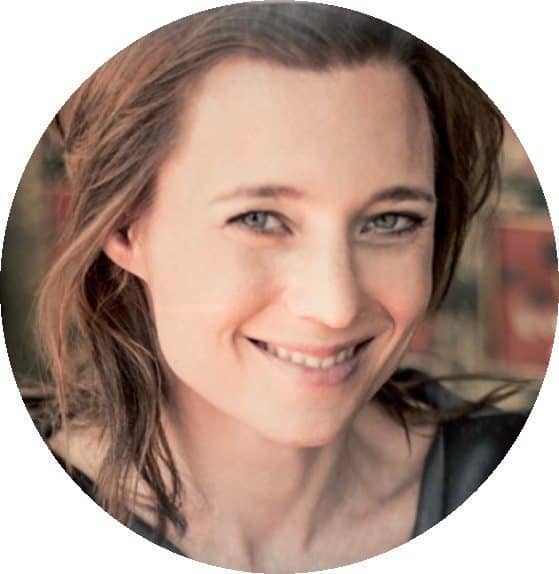