The official home of Santa Claus awaits you with magical natural spectacles, spectacular landscapes and unforgettable experiences. Close to the Arctic Circle, in the boundless expanse of Lapland, you can dive deep into the arctic winter.

Lapland is also worth a trip in summer: hike through the Bullerbü idyll of untouched nature, conquer the beautiful landscape by mountain bike or kayak and experience the Swedish midsummer.

You stay in extraordinary and incomparable hotels: ice hotel, glass igloo, futuristic tree house, glamping safari camp - nothing to be desired on a trip through Lapland!

Lapland is a region of Northern Europe, largely within the Arctic Circle, stretching across Northern Norway, Sweden and Finland to the Kola Peninsula of Russia. It is limited to the west by the Norwegian Sea, to the north by the Barents Sea and to the east by the White Sea.

Lapland, the common name for the region, is derived from Lapp, the Scandinavian name attributed to the Sami people who sparsely inhabited the region for several thousand years. Today the Sami regard Lapp as a derogatory term.

You name the region Sápmi.

Lapland borders on several national borders and does not exist as a single administrative unit.

Lapland is a region of great topographical diversity. To the west, it includes the northern part of the Kolen Mountains, which reach an altitude of more than 2,000 meters. On its Norwegian (western) side, this area drops off abruptly and is eaten up deep into fjords and headlands and breaks up into archipelagos.

The eastern flank of the mountains in Swedish Lapland (see Lapland) gradually falls into a broad Piedmont with large, finger-like lakes that feed the rivers in the Gulf of Bothnia. Finnish Lapland (Lappi) is a relatively low-lying region with many moors and small lakes.

Norwegian Lapland is largely open and windswept, the wood only grows in sheltered sections and in the sheltered interior. Southern and central Lapland lies in the zone of the taiga, the swampy coniferous forest, with its saturated land and many moors and swamps.

Forests of pine and spruce give way to the dwarf birch, the heather and the lichens of the tundra further north and at higher altitudes.

The Lapland region has a sub-arctic to continental climate, which is characterized by mild summers and cold, snowy winters.

During the main travel season from December to February, the region has an average temperature range of around - 16 ° C to 3 ° C, depending on the location, with occasional lows of around - 30 ° C (-22 ° F) or colder when the wind is cold. Fortunately, the dry, fresh air has a moderate effect on the temperatures. (See what to pack to stay warm and comfortable for your winter visit).

The amount and duration of the snowfall also varies depending on the location. The average number of days with snow between mid-October and mid-May is between 175 and 225 days per year. The long-lasting snow cover makes Lapland an ideal place for leisure activities such as dog sledding, skiing, snowmobiling, etc. (see our Lapland day tours).

In summer, temperatures are usually between 10 and 15 ° C and rainfall is moderate. Because of the abundance of rivers and lakes in Lapland, boating and fishing are particularly popular in summer, as is hiking.

Please note: weather conditions can change quickly and frequently, especially in winter. Therefore, we recommend that all visitors to Lapland take out travel insurance to secure their vacation plans.

Experience stories that reflect and enrich your personality. Unforgettable ...

The Arctic Icebreaker is a majestic ship that will take you on a truly unique cruise.

The thundering sound of more than 3,500 tons of steel crushing the thick ice of the Gulf of Bothnia impresses even the most experienced seafarers.

The icebreaker has been in operation since the early 1960s and opened Finland's frozen seas to merchant ships for 25 years before becoming a tourist attraction in the northern port city of Kemi in 1987.

How many “normal” people have the chance to climb an icebreaker and see it in action? The colossal collision between the massive mass of steel and the thick layer of ice is an extreme experience and will not be forgotten. 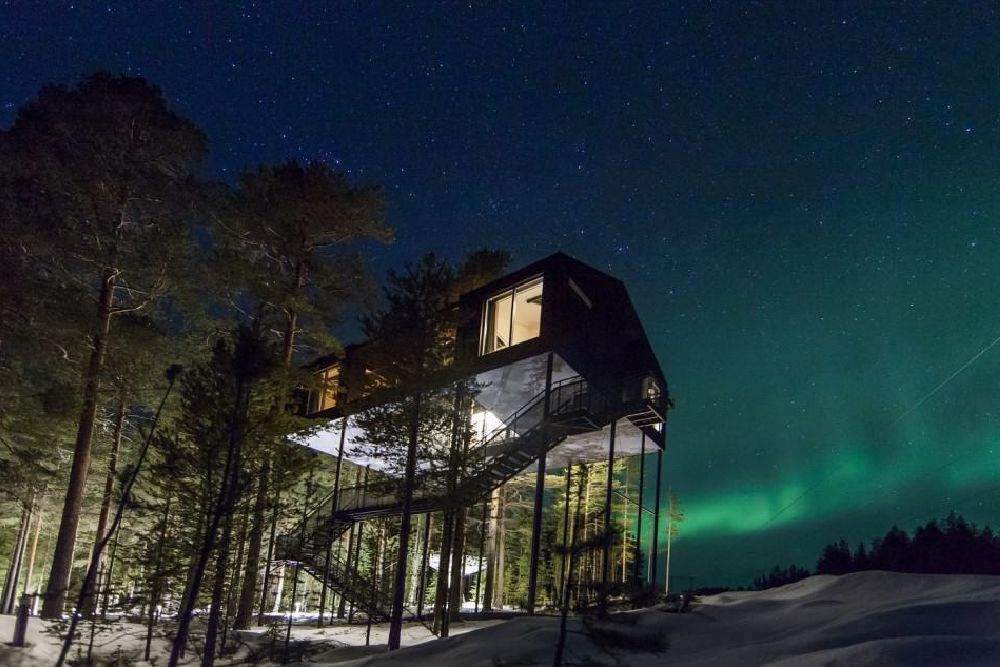 STAY IN THE TREE HOUSE

Almost like above the clouds. Didn't you want to be a child again and disappear into a tree house? Then you should definitely do this.

Here you can forget the time constraints of everyday life, enjoy the serenity and relax in a demanding but familiar environment.

Unforgettable and unique. Are you, like almost all people, fascinated by huskies? Her white fur, her steel blue eyes and her unbelievable power make you astonished?

Go on a breathtaking discovery tour of Lapland with these special animals. Enjoy the untouched wilderness and winter landscapes of Sweden and Finland on a sledge

Sauna is not just sauna. Surely your sauna has never been frozen in a lake, with a view of the aurora borealis and total solitude?

Are you looking for an unforgettable experience? Would you like to enjoy the real beauty of the archipelago and its nature?

Or do you see driving itself as the main purpose of this extraordinary expedition?

Whatever your reason, you will be amazed!

Experience the snowy forests and the frozen Gulf of Finland. Set off into the snowy Finnish wilderness by snowmobile.

Roar through the forest in search of the Northern Lights. Stop at a picnic area to make a campfire. Set up a tripod to capture the most extraordinary night sky photos.

This snowmobile expedition takes you on an easy and beautiful route through forest trails and the frozen sea.

Don't miss out on crossing the Arctic Circle in Rovaniemi, the capital of Lapland, the gateway to the Arctic.

Rovaniemi is the only place in the world where the Arctic Circle can be crossed underground.

50 meters underground, in Santa's caves, you step into the Arctic.

In the Arctic, all accommodations are part of your adventure. When was the last time you slept in a hotel with wild reindeer walking back and forth in front of your window, or in an old two-master frozen in the sea ice, or in a real snow castle with glowing ice sculptures?

For adventurous travelers who are looking for something extraordinary, we will find you a unique, extraordinary accommodation that we have personally selected. It doesn't matter whether it's something romantic for two or something family-friendly.

The magic of the Arctic doesn't stop when the sun goes down. Sleep peacefully in a room that is also art. A real bucket list experience in Lapland! Do it! 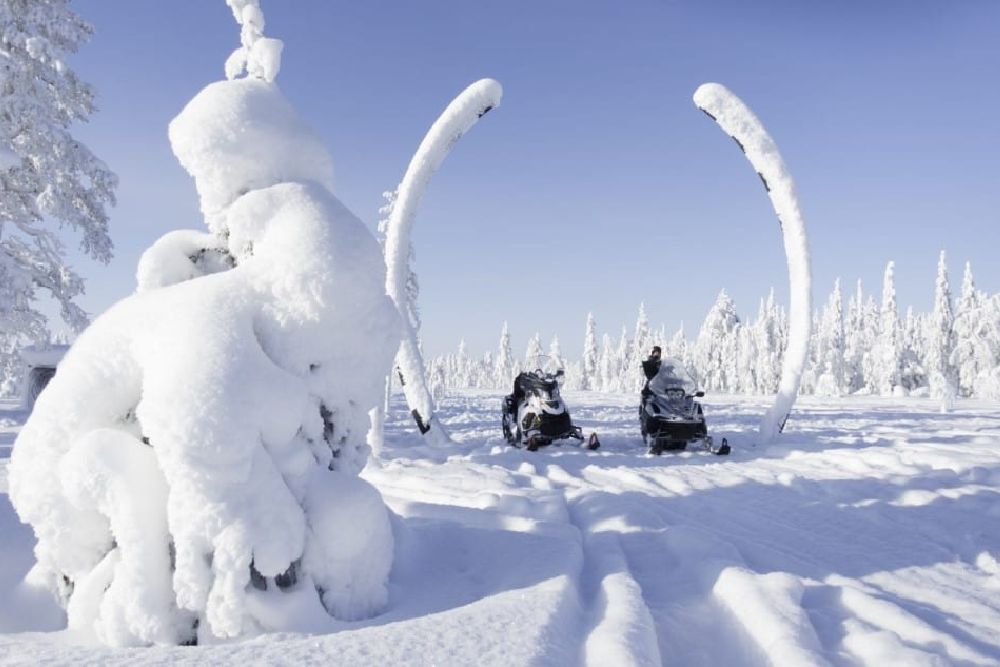 ACROSS THE NORTHERN ARCTIC CIRCLE BY SNOWMOBILE

Chasing through the powder snow thickly wrapped up and cheering like a child - your destination: the Arctic Circle! Fancy endorphins? Rise up. And let's go!

HUNTING FOR THE NORTHERN LIGHTS

The thrill of experiencing the Aurora Borealis is a once in a lifetime experience for many.

However, some become addicted and can never get enough of the bright colors in the sky. The northern lights dancing above is such a powerful and unique natural phenomenon that it changes life on earth.

Finland is one of the best places to see the auroras. Below are some tips on how to become a Northern Lights yourself.

Experience the exciting treasure hunt and a unique boat trip on the Ounasjoki River.

Did you know that we had the rold rush in Lapland at the same time as Klondyke? Now is your chance to experience the excitement of finding Lapland's hidden gold treasures through traditional gold panning.

If you're lucky, you might find a gold nugget!

Dare to do something surreal: glamping in a tipi tent on a peninsula full of snow and ice. Accessible by snowmobile or dog sled.

Let yourself be cooked by real Viking types and accompany you in the adventure consisting of cross-country, ice fishing, ice sculptures.

Learn to drive your own dog sled team and zoom to the Arctic Circle. Unforgettable.

Allow yourself a few days in a lonely log cabin without electricity or mains connection - but with a lot of space, space for ski touring, snowshoeing and looking at the world.

Chop wood, drill water holes and cook yourself. And relax: the polar bears are sleeping at this time.

Make a dream come true for your children. Your family will receive a letter with an invitation to the Santa Claus Village upon arrival.

Go on a journey of discovery through Santa's command center, meet his hardworking elves, before you get to know Santa Claus personally as the absolute highlight.

A bed of ice

Made of snow and ice, and not just outside. Everything, walls, ceilings, including all of the furnishings. Spend the most extraordinary night of your life in a bed of ice!

Spend dreamy nights in a luxurious log cabin, as if from a Bullerbu's fantasy, in the solitude of the unbelievable arctic nature.

Your private helicopter will take you to your destination and at the same time the starting point for a fantastic day in the pristine piste paradise.

We create your own personal challenge that can change your view of yourself and your life.

An individual creative mix of challenges in the immense solitude of the arctic Lapland. Do you dare?

Lapland is always worth a trip. The short summer (July / August) is the main season for hikers. Winter is the time of the northern lights and the sauna. The best time for dog sledding tours and other activities starts in mid-February.

Then it is already not so cold and the sun has been shining longer than in Central Europe.

The Lapland region includes parts of Sweden, Finland, Norway and Russia. In addition to these languages, there are various variants of the Sami languages (Sami / Lappish) that are used by around 24,000 speakers today.

Eating and drinking in Lapland

The cuisine of Lapland follows the season, there is what nature produces: elk meat, partridge, salmon trout. The national dish in Lapland is the palt, a potato flour dough dumpling that is filled with bacon. There are also cranberries.

“Souvas”, shredded reindeer meat, also tastes excellent. The side dish is often almond potatoes with mushrooms and hot waffles with cloudberry compote as dessert. In the mountains, the Sami sell smoked fish, with bread baked on stone.

In some regions of Lapland there are more reindeer per square meter than people. The indigenous people of Lapland, the Sami, have survived for centuries in the cold and barren landscape of the north and developed a unique culture that they have preserved to this day.

You do not need a visa as both Sweden and Finland belong to the EU. Entry into Swedish Lapland is possible with a passport or identity card, the same applies to a trip to Finnish Lapland.